97%
Excellent
9.65/10
Customer reviews
Cookie preferences
This website uses cookies, which are necessary for the technical operation of the website and are always set. Other cookies, which increase the comfort when using this website, are used for direct advertising or to facilitate interaction with other websites and social networks, are only set with your consent.
Configuration
Technically required
These cookies are necessary for the basic functions of the shop.
Allow all cookies
CSRF token
Cookie preferences
Currency change
Customer recognition
Customer-specific caching
Decline all cookies
Individual prices
Selected shop
Session
Comfort functions
These cookies are used to make the shopping experience even more appealing, for example for the recognition of the visitor.
Note
Statistics & Tracking
Affiliate program
Google Analytics
Track device being used
Categories 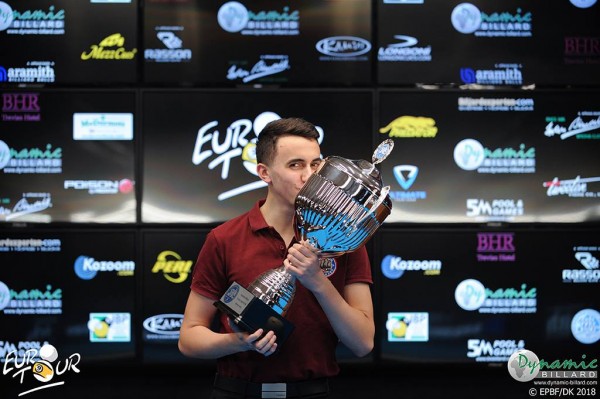 Fedor Gorst (RUS) has just won the Dynamic Billard Treviso Open 2018 with a thrilling 9:7 victory over Mateusz Sniegocki (POL) in the final match.
It was Gorst’s first appearance in a final match of a Euro-Tour ever today. He made his way over elite players like Petri Makkonen (FIN), Mieszko Fortunski (POL), Ivo Aarts (NED) and Maximilian Lechner (AUT) into the final match. His opponent Mateusz Sniegocki had just played a really tough semi-final against his teammate Tomasz Kaplan (POL) and just sneaked over the finish-line with 9:8. So the clash in the final match was experience versus youth. Sniegocki has already three Euro-Tour titles under his belt and today was his fifth appearance in a final match. Gorst was the newbie. „I had nothing to lose really,“ stated Gorst after the match. „The odds were all in favour of Sniegocki so I could play my game and enjoy the final match“. It seemed as if Gorst was as calm as one could be. „I was nervous“, admitted Gorst, „but I managed to keep my focus on the match and not think about winning my first Euro-Tour title.“ The match was really tight with both players changing in leading the scoreboard. At 7:7, Sniegocki missed an important shot. That brought Gorst to the table who showed no mercy to the experienced Polish and ran two racks, winning the final match with 9:7. „Tomorrow I will probably be happy about my 2nd place today,“ mentioned Sniegocki after the final when asked. „But today I’m suffering because I had my chances to win the match“.

Dynamic Billard is actively committed to protecting resources and the climate

We are committed to our responsibility towards the environment. By participating in the recycling cycles of BellandVision's and KlimaProtect dual system, we ensure the sustainable use of resources and the reduction of CO2 emmissions.